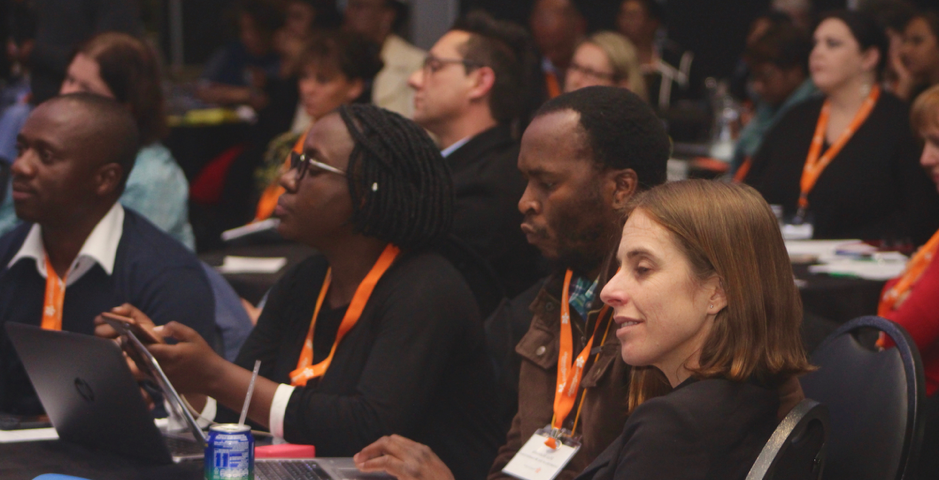 Looking back and looking forward for purposeful planning

This year the Siyaphumelela conference concluded the first phase of the project and explored exciting future possibilities. The Conference was held again in June at the Wanderers Club, Johannesburg, and maintained a similar format to previous conferences. The first day started with the customary pre-conference workshops. After lunch the conference opened with the first keynote presentation.

This year, three pre-conference workshops were hosted that focus on:

Listen to our delegate Ryan Pillay’s reflections on the workshop he attended.

Welcoming delegates to the conference, Jenny Glennie, Director of Saide, provided a fitting canvas to frame the picture of student success interventions. She gave a synopsis of the local systemic developments, as well as debunking the myths regarding group and gender throughput rates, sometimes incorrectly reported in the media. Thereafter, Bill Moses described the history and work of the  Kresge Foundation. Bill discussed the similarities of challenges of higher education in the USA and in the South African context. Bill re-iterated the commitment of the Foundation to eliminating equity outcome gaps in South Africa. His informative talk also touched on non-academic classroom barriers to success while presenting opportunities to alleviate such challenges. Moses concluded by highlighting the notion of transparency, transformation and sharing as key aspects of the conference, setting the stage for discussions on student success interventions.

Dr. Karen Stout, President and CEO of Achieving the Dream, the first keynote speaker of the conference addressed the topic “Helping all students succeed: Insights from the American Community College”. Stout’s talk drew on her own experience as a first-generation student comparing it to her father’s perseverance to study in later life, whilst he was the breadwinner of their family. She reflected on the opportunities made available to her through various USA support policies and interventions, highlighting the transformational power of education. Stout also described the development of the USA community college model, and commented on the absence of such hybrid institutions in South Africa. In addition, she provided a broad overview of the work of Achieving the Dream over the past 15 years, sharing lessons learnt and detailing an evolving sustainable model. Her talk was followed by an engaging discussion on ways to redesign of institutional systems for student success. Dr Karen Stout's share a few of the common challenges of student success in South Africa and the United States in the short video below.

The Siyaphumelela Partner Highlights sessions, a standard feature of the conference, highlighted the work of the five partner institutions, profiling their significant work to support student success.  The University of the Free State reported on their high-tech, high-touch approach.

Other partner highlight sessions were:

Comments from the evaluation attest to how valuable find these sessions are perceived with many delegates undertaking to implement similar measures at their own institutions.

A rousing second international keynote by Michael Sorrel, President of Paul Quinn College, greeted delegates on the second day of the conference. His talk, “Tales from the front lines of poverty: #nationbuilding and Paul Quinn College story", spoke to the notion of ‘Leading with Love’ as a quintessential trait of successful leadership. He provided anecdotes from his twelve-year tenure at the Paul Quinn College, in which he described resuscitating the institution by turning their football field into a farm. Through this initiative funds  were generated for the school and to feed the students. His talk resonated well with many delegates who rated it highly. Listen to the plenary discussion that followed thereafter.

Jenny Glennie, Director of Saide shares her thoughts on Michaels Sorrel's talk and her excitement about the possibility of the Siyaphumelela network extending to other universities.

Parallel presentations from the wider network of universities followed on issues such as food security, costs of tutorials, First Year experience, academic advising, extended degree programmes and many others. Most of the presentations are available on the Siyaphumelela website in the Resources section (search using the category “Conference 2019”). Though the sessions were generally well-received by delegates, some delegates felt that there still insufficient discussion time, with others expressing a need for more practical demonstrations.

The conference included two invited papers that were presented in plenary. One on Extended Curriculum Programmes by Prof Nthabiseng Ogude and colleagues (University of Pretoria). The other, a joint presentation on Student and lecturer engagement data for institutional and sectoral transformation by Prof Ahmed Bawa (Universities South Africa) and Prof Franscois Strydom (University of the Free State). This paper along with other presentations were reported in a special dedicated edition on the Siyaphumelela Conference 2019 by University World News.

Watch the video below of a first-time attendee's impressions of the conference.

The last day of the Conference opened with Prof Marietjie Potgieter’s (University of Pretoria) keynote presentation on Enhancing student success in tertiary mathematics: The multiple dimensions of institutional responsiveness. She described the University of Pretoria’s journey in improving the throughput rates in Mathematics. She analysed three factors associated with underperformance in mathematics, namely: the complexity of the discipline, resource constraints and under-preparedness of students. Thereafter the University’s responses to addressing these challenges focussed on student support, staff capacity and curriculum development using data to guide their plans and interventions.

“Most brilliant, resilient, noodle-eating agents of change”, the witty phrase that emanated from the student panel who were tasked to reflect on their experience of the conference, summed up the calibre of the inspiring student input received this year. They provided a valuable perspective on the relevance of the interventions and endorsed the work of the  Siyaphumelela programme. They also appreciated that the programme was actively promoting the principle that ‘students matter’. Prof Volmink, chairperson of Umalusi Council for Quality Assurance in General Education and Training, raised the need for a new ecosystem for student success in his keynote address, as the last speaker of the Conference. He shared his reflections on lessons learnt over the last 30 years on student under-preparedness and the move away from the deficit model of thinking, which had left students feeling alienated, to the new paradigm of institutional and curricula change for student success.