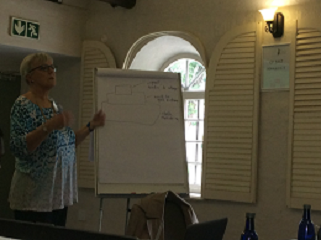 Saide (as the backbone organisation) of the Student Success project funded by Kresge, combined their annual site visits with Dr Jan Lyddon's coaching sessions at the various Partner Institutions. Dr Ephraim Mhlanga accompanied Prof Alan Amory to NMMU while Dr Najma Agherdien joined the Wits University visit. The purpose of these visits is to get feedback on progress at institutions and to identify areas where support is needed.

The Siyaphumelela visit to NMMU happened on 3rd November 2016 and, as highlighted above deliberately coincided with Jan Lyddonn's data coaching visit. Due to the current disturbances at public universities in the country, the meeting was held at the Radisson Blue Hotel, a charming venue facing the gorgeous beaches of Port Elizabeth. The weather was cool though rather windy, especially in the afternoon.

Nelson Mandela Metropolitan University is implementing an intervention aimed at identifying weak students early enough in order to provide the necessary support for them to succeed. This early warning initiative is dubbed the Risk Analysis and Detection in order to Assist and Retain Students (RADAR).

The morning of the first day focused mainly on project plans put in place for the year in order to develop an effective early warning system. In 2016 the project is being piloted in the Faculty of Law, although other Faculties’ like IT Engineering, Accounting and Education participate on a voluntary basis. An interesting development that was reported was the request by university residences to fund an enrichment project called the Passages Programme – a programme that supports students academically in their residences. A data base for Passages Programme was reportedly developed and integrated in the RADAR data base so that there is only one and not several disparate data systems.

The NMMU team also reported that they conducted a BUSSE survey of first year students on which they received 1000 responses. Some of the interesting information that came out of the survey are that:

The majority of 1st year students are first generation students to attend university in their families.

Only a small number of the first generation students that enrol for university programmes graduate.

First generation students have wrong expectations of the demands of university education at registration.

They expect university education to be easy and to be attained with minimal effort. This tends to frustrate them when they discover otherwise as they get along with their studies.

NMMU had planned to capacity building workshops in October-November 2016 but these could not materialise due to disturbances on campus. In order to establish the contribution of the Siyaphumelela initiative in the University, the NMMU team would like to conduct an investment analysis benefits study. They identified an expert based in Pretoria who can provide them with training support on this aspect. Jan Lyddon also promised to send them a copy of the chapter she co-wrote on evaluating student success interventions. Evaluating the benefits of the Siyaphumelela interventions is something that all project institutions may want to undertake.

In order to get students more involved in initiatives that are meant to improve their academic performance and enhance throughput rates, NMMU reported that they developed a compulsory module called Social Consciousness. This module was developed by students. The meeting acknowledged that more and more involvement of students in planning processes is likely to alleviate tensions between management and students.

The Pro Vice Chancellor reported that then institution was busy strategizing on a possible recovery plan that ensures that the academic gains of the 2016 academic year are not lost as a result of current campus disturbances.  In this regard, an important point that she raised was the need to explore how the Siyaphumelela initiative can respond to some of the issues currently faced. Key questions to think about are:

How to roll out an early warning system based on online systems?

Would it make a difference if all students are provided with a mobile device like a tablet?

How can institutions build trust from students?

The NMMU team reported that the Bachelor of Science in Quantity Surveying at the University boasts of throughput rates of 85%. It would be useful to draw lessons of experience that can inform practice in other programmes.

After her visit to the institution, Jan Lyddon commented on the RADAR:

"My hat is off to all of you, Dierdre Els and Lynn Biggs for the continued expansion of RADAR.  It appears to be a well-accepted and growing network source of information for and about students that will support early alerts and actions.  I appreciated as well the thoughtful and conscientious approaches to ensuring the right information – guided by ethical considerations – is shared."

The Wits site visit kicked off with a meeting with the DVC Academic, Prof Andrew Crouch, followed by reflections on project progress, lessons learned and future analytics plans by the Wits project team. It was reassuring to note the DVCs commitment to the project and an attitude of constant improvement, particularly relating to the planned organisational change to enhance efficiency. The notion of not letting a good crisis go to waste – the current student protest movement – featured strongly and guided some of the future plans.

The question of how data is used and absorbed and how this data is communicated to institutional leadership was posed. Reporting on current related work, it quickly became evident that the Wits Siyaphumelela team had made considerable progress in data collection and analysis and were constantly looking at refining tools (especially the biographical data survey tool). The team is planning to present their learnings from three out of five faculties at the 2017 Achieving the Dream Conference. Further, a need was identified to look at what is common or unique about the results across not only faculties at Wits, but also across partner institutions.

Jan commended the team for their efforts and pointed to a number of important considerations going forward. One consideration related to influencing the trajectory of student progress to increase success in a very intentional way. She suggested a practical example of achieving this would be effective goal setting and prioritising (or what she refers to as focusing on 2-3 wildly important goals). Another consideration related to careful monitoring and evaluation of the project and she further suggested that value judgments as the project progresses would assist institutions to get a sense of what is working, or not, how much they are doing and how well they should/could do. The team appreciated the words of advice and committed to continued, strategic actions.

The Siyaphumelela project visits and data coaching sessions at NMMU and Wits served to revive energies and commitment to the goal of student success. Nurturing an institutional attitude of every student can/will succeed coupled with provision of the necessary support remains urgent.